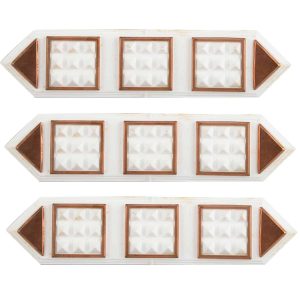 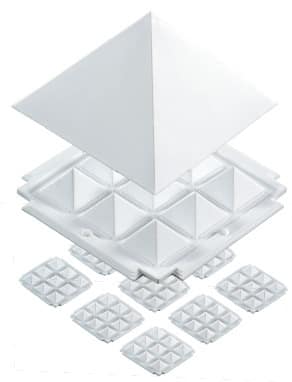 Gold Trishul Pyramid for Protection powered with 23 gold pyramids wipes out all sorts of evil forces. Anger, Lust, and Greed are the three main enemies of human beings. This ‘Tri- Symbol’ with the combination of Gold Pyramid power helps to control these three faults of our life. The Pyramid with Trishul combo also enhances the effects of positivism in the place you are kept.

The Trishul or Trident has great importance in the Hindu religion; it is in the hands of almost all the major Deities. Trishul is the main weapon of Lord Mahadev (Shiva) and was also used as a powerful weapon by the Goddess (Maa) Durga. The 3 pointed blades of the Trishul signify Lord Brahma, Lord Vishnu, and Lord Shiva himself and according to other legends, Trishul also symbolizes the Tridevis – Maa Kaali, Saraswati, and Lakshmi. It also represents the three modes of nature –creation, maintenance, and destruction.

It is perhaps the most powerful weapon along with Vishnu’s Sudarshan Chakra (mentioned in Hindu mythology). “Trishul” mainly guards us against bad luck, adversity, danger, and mishaps. The great combination of the Trishul symbol and the Pyramid releases positive vibrations in the surrounding.

Pyramid cleans out Aura’s and helps in balancing Chakras.

The Pyramid with Trishul combo also augments the effects of positivism in the place you are kept.

Buy 100% Original & Genuine Jiten Pyramid Gold Trishul Jiten Brand Products from Brand “Plus Value” Authorized Distributor of Jiten Pyra Vastu Pyramids for Home, Offices, Industries, Factory. Order Online in India at https://plusvalueindia.com. (Delivery Time 3-7 Working Days anywhere in India)
All Products are Energized using our 2 Step Method Before Dispatch.
Please Note: We Ship in India Only at the Moment. If you want your order to be delivered outside of India contact us on WhatsApp/Chat for the solution.